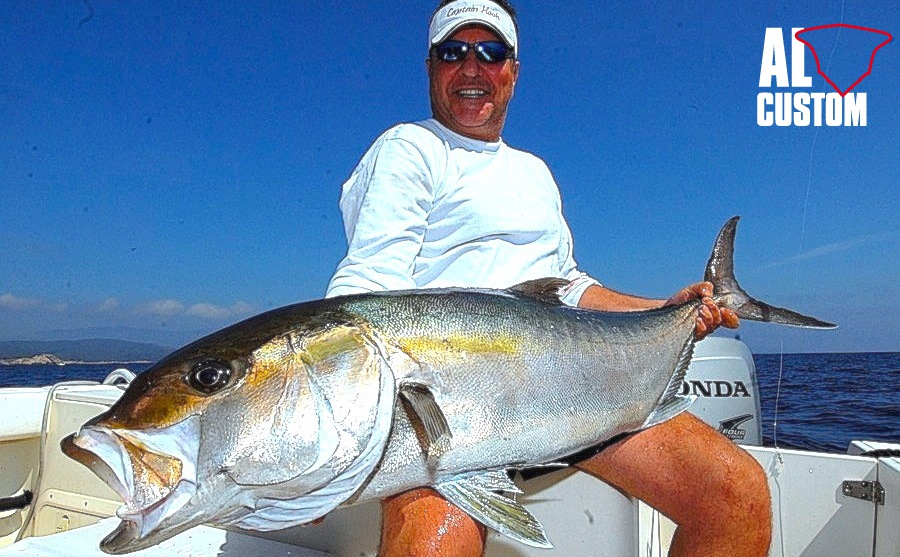 “Capt.Hook” and a splendid amberjack

Livebait trolling: what to do.
– Look for the greater amberjack driving the fisherman out of the shallows. Frequently, when in midwater, in the blue, these fish more gladly attack trolled baits, compared to when they are hunting in the shallows.
– Insist on the same areas for several hours. While trolling searching for the amberjack you must take into account that often they do not remain in the areas in which we fish them, but move there at specific times, both for habit and hunting.
– Troll at a high speed.The amberjack is a very suspicious fish and if he sees a potential prey that swims abnormally he will not eat it, but will hit it with the muzzle to see how it reacts. It ‘s always better to not troll the bait at less than 1.5 knots.
– Wait until the snap is clear before striking. The amberjack often attacks the baits in two subsequent moments: grasping them in the middle of the body and then turning them on the side of the head, swallowing them. Strike as soon as you see the rod bending, it can often mean pulling it away from its mouth.

Livebait trolling: What not to do.
– Insist by fishing at the bottom, under the rocky reefs. When the amberjacks are fixed under the shoals, if they decide to take the bait, they’ll do it at the very beginning. Better change strategy if you don’t have immediate results.
– Do not strike when the drag starts off violently. This is because the amberjack often grasps the baitfish in the middle of the body, turning and running towards the bottom. Even in these cases it is essential to strike to avoid him spitting out the bait after a few seconds or tearing it off from the hooks without it being caught.
– Try to move the just hooked amberjack from the shallow, stressing it. Attempts to force the fish away from the rocks by increasing the drag, or worse, by giving the boat, power, will just scare the fish further and bring it to break at the bottom. Instead, it is advisable to slightly open the brake and try to go on its vertical with the boat, without forcing it.
– Reduce the diameter of the leader if you have no bites. The amberjack is a very strong fish that not only will attempt to tear the line between the rocks, but also has an abrasive mouth. Using monofilaments below 0.60 as leaders, will preclude any possibility of winning its reaction.